Pending city approvals, construction on the 348,000-square-foot store is expected to begin next fall, with the opening in spring 2020.

IKEA, which is known for massive stores that contain full room displays and sell furniture, home decor and gadgets, opened in Tempe in 2004. The company said the new Glendale location will accommodate customers living in the West Valley.

“This proposed Glendale store would complement our Phoenix-area presence established in Tempe and bring the unique family-friendly shopping experience closer to customers in the West Valley and beyond,” IKEA U.S. President Lars Petersson said in a written statement.

The Glendale store would include nearly 10,000 items, 50 room settings, three model home interiors, a children’s play area and a restaurant, according to the company. 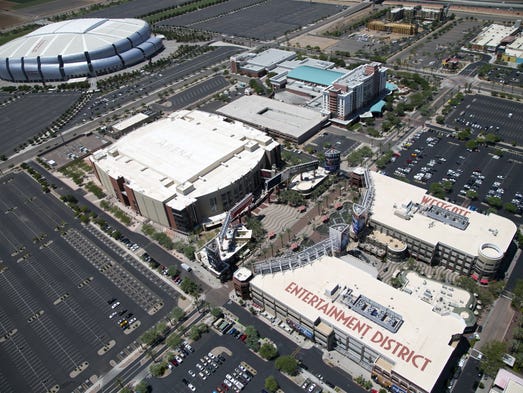 An aerial view of University of Phoenix Stadium, Gila River Arena and the Westgate Entertainment District in Glendale.  David Wallace/The Republic
The project is the latest to be announced or to open in Glendale’s sports and entertainment district.

In August, TopGolf announced it would open a golf-entertainment venue just across the freeway from the planned IKEA. Loft-style apartments are expected soon in the Westgate Entertainment District, the restaurant, entertainment and shopping hub around the football stadium and hockey arena. And there’s been a string of other projects such as more restaurants, a bowling alley-microbrewery combo and a hotel.

The nearby Desert Diamond Casino West Valley also will begin building its larger resort and casino by the end of the year.

“The freeway access and visibility, the available workforce and the energy of Glendale’s Sports and Entertainment District make it the perfect location for IKEA,” Phelps said in a written statement.

IKEA expects to add more than 500 jobs during the construction phase, and hire roughly 300 workers after completion.

“This city has been amassing an impressive list of corporations that now call
Glendale home,” Friedman said in a written statement. “These new businesses account for more than two-million-square-feet of new construction in this dynamic district alone.”

‘One of the hottest real-estate areas’ in Valley

The IKEA is planned on farm fields previously held by the Bidwill family, the longtime owners of the Arizona Cardinals.

At the height of the real-estate boom in 2007, the NFL family envisioned a high-density corporate center with a 400-foot skyscraper rivaling those in downtown Phoenix. By 2010, two years into the Great Recession, the land was in foreclosure and went back to the lender.

IKEA purchased 67 acres, just under half of it for the store and its 1,100-space parking lot, Phelps said. The company plans to work with the city and developers to bring in businesses that complement IKEA.

Further south along Loop 101, a project called Urban 95 should bring a hotel, multi-family homes and more commercial development. All of this will change the area’s landscape over the next 24 to 36 months, Phelps said.

“You go about a one-mile circle around IKEA and you’re going to see, I think, one of the hottest real-estate areas in the entire Valley,” Phelps said.

(Source: CasaGrandeDispatch): Bethany Blundell Harrah’s Ak-Chin Hotel and Casino is in the midst of a $180 million expansion that will bring improved entertainment as well as job opportunities to the area. The expansion is being completed in two phases that will encompass nearly every part of the property. “We’re building a bigger, better playground,” said Read More…

(Source: EastValleyTribune): Colleen Sparks – Construction of a high-rise office building near Chandler Fashion Center is finally underway on the site of Elevation Chandler – an unfinished development that became a controversial eyesore even before the Valley’s real estate market crashed in 2008. International real estate firm Hines broke ground recently for the Offices at Chandler Viridian, Read More…

(Source: AZCentral): Russ Wiles & Jessica Boehm – Park Central Mall in midtown Phoenix, plus sites in Tempe and Mesa may be the new Amazon HQ: Amazon now will consider those options for its giant second headquarters, along with hundreds of other proposals submitted from across the nation and Canada. The online retailing giant set a Thursday deadline for North Read More…