Financial adviser Bijan Golkar begged his father to update his estate plan after his father divorced and purchased sizable business and real-estate holdings. But despite his cajoling, his father wouldn’t take action. When the dad died three years ago at age 59, he left behind a seven-figure estate, a 15-year-old estate plan and a huge mess for his three sons to clean up.

Because the father initially wrote the estate plan when he was married, it was not valid at the time of his death. This automatically sent the estate through the probate-court process, leaving the sons at the mercy of the court with respect to timing and ultimate disposition.

“As an adviser, I’m used to some people dragging their feet on this, but in the end they get it done. My own father, I couldn’t get him to do it,” says Mr. Golkar, a certified financial planner and chief executive of FPC Investment Advisory Inc. in Petaluma, Calif.

Many baby boomers are in the same precarious position as Mr. Golkar’s father was. They first tended to their estate plans many years ago—often after the birth of their first child. Now it is 15, 20 or even 30 years later and they haven’t revisited critical documents, including wills, trusts, powers of attorney, advance directives and living wills. Some have simply forgotten about them, while others ar 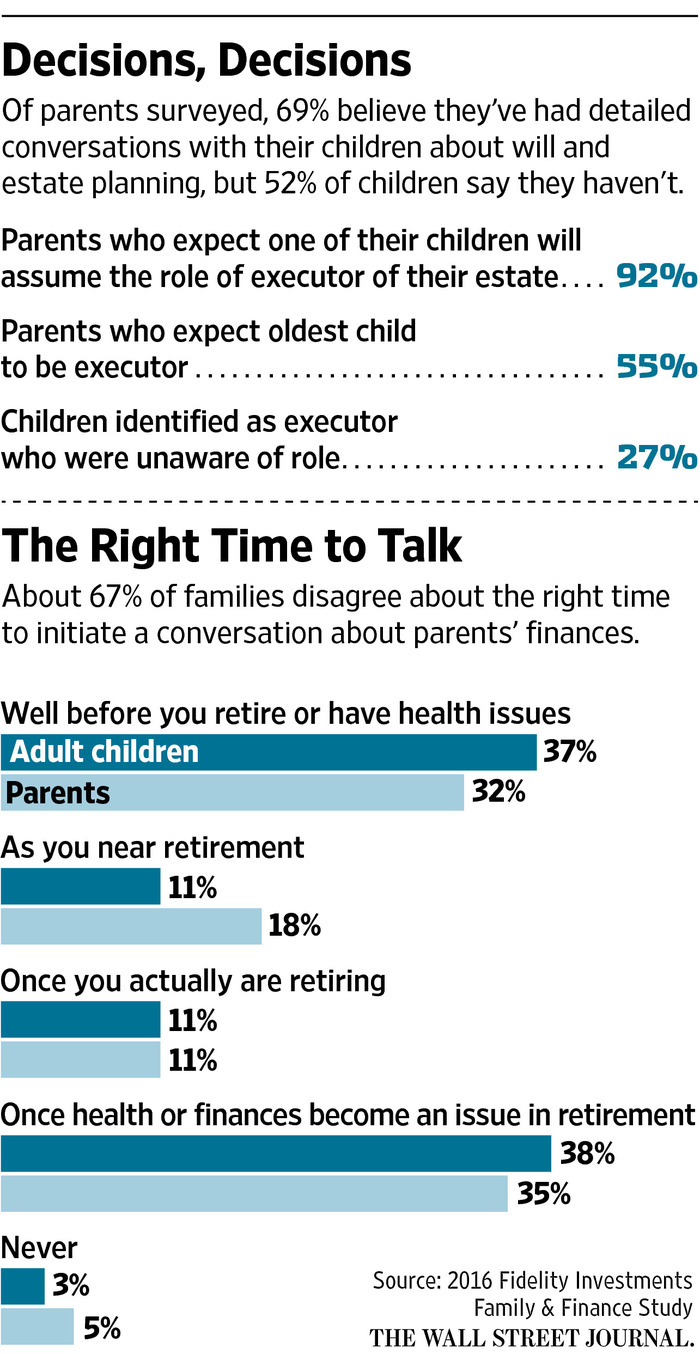 e perpetual procrastinators or prefer not to revisit these difficult discussions.

This means that they haven’t accounted for significant changes—like remarriage, divorce, or the purchase or sale of a business, expensive art or real estate. All of these events, along with meaningful changes in estate-tax laws and state rules related to wills and trusts, can have major financial and emotional implications for heirs, says Jared Feldman, a partner in the private client group of accounting firm Anchin, Block & Anchin LLP.

“Trying to fix things after the fact becomes much more complicated and some of the fixtures can’t even be unwound,” Mr. Feldman says.

Mark Doman, chief executive and managing member of the Doman Group, a registered investment adviser in New York City, has a client in this predicament. Her baby-boomer dad died at age 70 in 2016 with an estate plan that hadn’t been updated in many years. The assets in the estate—including a house and a basket of highly concentrated stocks—exceeded the federal estate-tax exemption (the limit was $5.45 million per individual in 2016). Because of the dad’s inaction, Mr. Doman says, the taxes significantly diminish her inheritance—an unintended and potentially avoidable consequence. For the part of an individual’s estate that exceeds the limit, the top tax rate is 40%.

Another reason to consider updating your estate plan: the possibility that you could outlive your children. When children die before their parents, actions already taken and plans laid with regard to transfers of wealth can turn out to have unforeseen, and unfortunate, consequences.

Jeff Fishman, founder of JSF Financial LLC, a registered investment adviser in Los Angeles, gives the example of an elderly client whose baby-boomer daughter had a will leaving her possessions to her partner. Subsequently, the daughter inherited several family heirlooms and began helping her widowed mother financially. But then the daughter died unexpectedly; as a result, the mother was unable to recover the family heirlooms, and she lost the financial support, too.

Indeed, not updating your estate plan can lead to unintended family rifts after you’re gone. Nick Maggard, owner of Maggard Elder Law in Florence, Ky., which focuses exclusively on elder law and estate planning, recalls a situation where a client ended up with a windfall because his portion of his parent’s estate ended up being worth a lot more than his sister’s. Their parents had never adjusted their estate plan to account for changing market conditions—increasing the strains in an already tense relationship between the siblings.

Charles Lowenhaupt, chairman and chief executive of Lowenhaupt Global Advisors, a registered investment adviser in St. Louis, tells of a client who was a textbook example of why it’s important to update an estate plan. The client, in his 50s, is finally getting around to revising his two-decades-old will. Had the client died a few years earlier—when his children were still minors—there would have been a major problem. The guardian designated many years ago had since become an alcoholic.

Mr. Lowenhaupt recommends clients review their estate-plan documents annually. “It’s never a good idea to leave the fate of your heirs to luck,” he says.

In Mr. Golkar’s case, the court divided the dad’s estate equally among the three brothers, but it was a huge headache getting there and left the brothers no flexibility. It took Mr. Golkar a year-and-a-half to settle everything in the estate, with the support of his office staff and having knowledge of how the process all works. Without that, it could have taken years longer, he says.

“The saving grace in this case is that my brothers and I get along extremely well and agreed on all the decision-making,” he says, “It usually doesn’t work out that way.”

Planning Ahead for Longer Lifespans

(Source: Barrons): Abbt Schultz – For decades, wealth advisors would encourage investors to shift their mix of portfolio assets to more conservative investments as retirement neared. But no more. While the final days of an individual’s financial life used to be when they hit their 60s or 70s, today, “that’s kind of the entry point,” says Leslie Read More…

8 Signs Your Estate Plan May Be Worthless

(Source: Kiplinger): Casey Robinson – If it’s been a few years since you completed your estate plan, chances are your documents could need some serious updating. Here are some key areas of your estate where potentially perilous gaps can crop up. Most people hate reviewing their estate plan, and I can’t say I blame them. From Read More…

(Source: Washington Post): Clara Wiggins – No one wants to think or talk about it, but choosing someone to take care of your children if you die could be one of the most important decisions you make as a parent. That question hit my husband and me hard one awful day a few years ago when my Read More…