Arizona State University is getting ready to develop seven acres north of the Phoenix Biomedical Campus in downtown Phoenix.

As part of the process, ASU leadership is seeking community input on what the vision of the development should be. 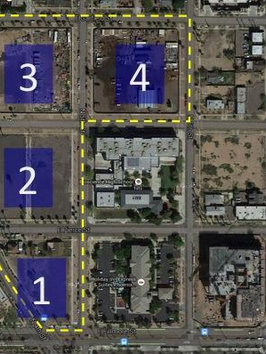 The vacant land is north of the 30-acre Phoenix Biomedical Campus, adjacent to the Phoenix Bioscience High School.

As part of an agreement with the city of Phoenix, ASU needs to develop 1.5 million square feet of bioscience and health projects, including parking, said Rick Naimark, associate vice president for program development planning at ASU.

The first building needs to be built by the end of 2019, he said.

That will create a need for 475,000 square feet of research buildings, he said.

ASU won’t necessarily occupy all 1.5 million square feet downtown, and most likely will spread its research across its other campuses in the Phoenix metro area, he said.

The public university recently leased space in the Translational Genomics Research Institute headquarters on the Phoenix Biomedical Campus, taking 18,000 square feet vacated by University of Arizona when it opened its research building on that campus.

Two years ago, Phoenix agreed to lease the seven acres north of the Phoenix Biomedical Campus to ASU, with the potential to work in partnership with NantWorks LLC, owned by Dr. Patrick Soon-Shiong, the world’s richest doctor.

However, an agreement never was forged with Soon-Shiong, and the two organizations are not in negotiations, Naimark said.

(Source: Fortune) Berkshire Hathaway has taken a nearly 10% stake in Store Capital, a real estate company that invests in single-tenant properties, adding to bets in the sector by the conglomerate controlled by billionaire Warren Buffett. Store said that Berkshire’s National Indemnity unit spent $377.1 million on 18.62 million shares at $20.25 each, giving it Read More…

(Source: ScottsdaleIndependent): Terrance Thornton The laws of supply and demand continue to swing the economic pendulum to those looking to sell both single-family and multifamily residential dwellings throughout the Phoenix metropolitan housing market. Data shows the Phoenix housing market is on good footing with all economic indicators — inventory levels, foreclose rates and both median Read More…

GILBERT, AZ, (June 20, 2017) – The Morrison family continues to implement its master planned community in Gilbert. Four homebuilders have purchased ­­­­portions of 120 acres (Lakeview Trails Southwest) from the Morrison family to continue their operations within the popular master plan.  The character of the neighborhood continues to build on the rural, ranch feel of the Read More…